Mist CVD* is seeing broader use, both inside and outside Japan, as a method for fabricating high-quality, functional thin films at atmospheric pressure. The developer of this technology, Professor Toshiyuki Kawaharamura, was early to notice the potential for mist flow--a gas-liquid multi-phase flow for handling both gas and liquid fluids--and he has continued research to establish mist CVD as a technology used in nanotechnology. As part of that process, he discovered that droplets in the Leidenfrost state exist in the reactor (ELSD), and that time to collision between the droplets is sufficiently long (LPCD). In this way he has developed the approach into a technology which simultaneously achieves low environmental impact, uniformity over a large area, high quality, and composition control--results impossible with previous techniques. *Mist Chemical Vapor Deposition

Development of functional thin films is definitely a key point for improving the performance of electronic devices.

Ordinarily, high-cost vacuum equipment is used for thin-film fabrication, but this requires a lot of energy to maintain the vacuum state. Thus, there has been a need to develop alternative technologies to reduce environmental impact. However, if functional thin film is fabricated in the atmosphere instead of in a vacuum state, then unevenness appears due to heat convection or side reactions, and thus it has been thought difficult to apply this to nanotechnology in a simple way.

Professor Kawaharamura has developed mist CVD, a thin-film fabrication technology using mist flow, and discovered and established methods for sophisticated control of chemical reactions in the atmosphere. Steps toward practical application have already been taken.

In the mist process, a solution is made into a mist and carried by a carrier gas, and a thin film is fabricated through thermal decomposition. Mist droplets produced by ultrasound are particularly small in size, so they can stay in the air, and be transported or move through laminar flow like a gas, and thus have little environmental impact. Professor Kawaharamura has devised a technique called "collisional mixing" in which a pressure loss is produced and laminar flow achieved by exploiting the properties of mist and making the gas containing mist collide with itself. Using this technique, he has invented equipment to produce a uniform mist flow, successfully controlled the raw material flow, and achieved fabrication of homogeneous thin films.

Furthermore, he discovered that, when gas containing mist flows through a reactor, there is a Leidenfrost phenomenon whereby droplets float due to the sudden heating. His demonstration of this phenomenon has helped to elucidate the principles of fabricating homogeneous thin films, and stimulated a major development of this research.

"When gas raw materials are used in the ordinary way, a typical gas has high concentration upstream and lower concentration downstream, and unevenness appears in the film. With the mist method, on the other hand, raw material droplets that approach close to the heated substrate run on top of the substrate while exhibiting the Leidenfrost effect, and thus the same amount of gas is supplied over the entire surface for film deposition. For this reason, we can expect fabrication of more homogeneous thin films compared to previous technologies."

This effect enables fabrication of thin films that are uniform over a large area, with high quality at the atomic level. Mist film deposition equipment has been developed for practical use by Toshiba Mitsubishi-Electric Industrial Systems Corporation (TMEIC), and adopted by companies in Japan.

While pursuing this research, based on his desire to "realize technology surpassing conventional techniques by exploiting the characteristics of mist," Professor Kawaharamura has discovered that there are "times with no collisions for 1 minute" between droplets suspended in the air. (LPCD)

In recent years, there has been a need to develop multi-component materials combining multiple raw materials, but the associated fabrication technology has not kept up with needs. Professor Kawaharamura reasoned that "if multiple solvents can be supplied to equipment, and transferred to a reactor within one minute, then perhaps mixing together can be avoided," and experiments confirmed that functional thin films with a desired composition can be fabricated with far greater ease than with conventional approaches.

This phenomenon enables film deposition without causing side reactions, even when diverse raw materials are supplied simultaneously to the reactor. The mist CVD method Professor Kawaharamura has created has evolved into a powerful tool, as good or better than conventional technologies, which simultaneously achieves low environmental impact, uniformity over large areas, high quality, and microstructure control. 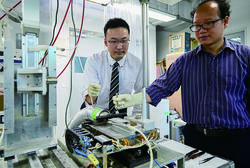 A new elucidation of the reaction mechanism, enabling prediction of film status from film deposition conditions

At the beginning of 2020, Professor Kawaharamura successfully elucidated a new reaction mechanism, for understanding the raw material diffusion process through which a thin film is fabricated on a substrate surface with mist CVD.

"The raw material droplets supplied into the reactor diffuse isotropically, and through trial and error I tried to calculate the distribution of deposition on the substrate surface. Finally, eight years after the experiment concept, and two years after starting numerical analysis, we've achieved an excellent match between experimental and computed values. More than half of the mist CVD mechanism has been elucidated."

This method enables prediction of the status of the film after deposition, based on the properties of the starting materials and the film deposition conditions. "As a film deposition technology, we have already brought mist CVD to the point of being a genuine technology. We have established a basis for future development."

Mist CVD is currently establishing a position in the industrial world. Many inquiries have been made by companies to Professor Kawaharamura, and his profile has risen to the point that he is currently involved in close to 10 joint research projects.

The mist flow, i.e., the gas-liquid multi-phase flow for handling both fluids (gas and liquid), requires the manipulation of many more variables than a single-phase flow, and this tends to be regarded as hard to handle. However, Professor Kawaharamura turns this thinking around, "We can look at the high degree of freedom in another way. Skillful control of the variables may enable us to solve problems we couldn't solve with previous technology." That thinking has led to the results achieved thus far. Professor Kawaharamura was the first to develop the mist CVD process, and it is no exaggeration to say he is the only figure who grasps all the fundamentals of this technology.

At present, he has started development of process technology, derived from mist CVD and exploiting the behavior of mist droplets, for "directly" forming integrated devices on curved surfaces, a feat regarded as impossible with previous nanotechnology. The scope of his research is diverse and goes beyond these fields into areas such as development of power sources and omnidirectional transport systems. He is also familiar with a broad range of engineering fields, such as chemical, electronic, and, mechanical engineering. Professor Kawaharamura has realized numerous ideas through his curiosity-driven discoveries and original inventions, and he may be just the person to make turn the impossible into the possible.