People maintain the balance of their body unconsciously. An objective indicator of that is center of gravity sway. By using a stabilometer, it is possible to measure the sway of a person's center of gravity when they are in an upright standing posture, but measurement deviations are large and precision is inadequate. Here, Associate Professor Motomichi Sonobe noticed the method of estimating the center of gravity position using a force platform. Similar research has been done before, but the distinguishing feature here is that balance capability can be measured in detail by creating a model taking into account the motion characteristics of human beings, and then estimating the movement and force of a person on a force platform. In fact, the system boasts precision that compares favorably with measurements obtained through motion capture, and its most important feature is ease of measurement.

Assoc. Prof. Sonobe has been interested in personal mobility systems like the Segway, and one of his research themes is development of small personal vehicles. As basic research for that purpose he developed an electric skateboard which prevents falling by accelerating or decelerating according to the movement of the person. At that time, he developed a system identification method that enables evaluation of the balance capabilities of individuals, such as their resistance to falling down, by measuring response when a cart is moved back and forth. Furthermore, he developed a method of estimating center of gravity using a force platform in order to facilitate center of gravity measurement.
"In interacting with people from medical institutions as part of my research activities, I discovered there is a tremendous need for diagnostic techniques to infer the causes of a decline in balance capabilities. I thought maybe I could apply the center of gravity estimation method using a force platform that I developed."
Measuring balance capabilities requires measuring changes in posture and joint force. However, with the stabilometers that are typically used, only the center of pressure can be obtained, and no information is provided on the center of gravity and posture. On the other hand, there are more sophisticated measurement methods which use three-dimensional motion analysis systems employing multiple cameras and markers, and wearable inertia sensors, but prior preparation and post-processing are complicated and there is a heavy burden on both the measurer and the measured subject. Also, developing equipment for the former system in particular costs more than ¥10 million, and thus there are high hurdles in terms of costs.
For these reasons, there were issues with the development of measurement techniques enabling acquisition of center of gravity and posture information by accurately measuring sway, with ease of use on a par with previous stabilometers, but that was realized by the center of gravity estimation system developed by Assoc. Prof. Sonobe. With this system, a person stands on a force platform and the person's movement and force are estimated based only on measurement of force on the soles of their feet. The time required is only a few seconds. Furthermore, the system is accurate, and the major attractions are its easiness and high precision.
Assoc. Prof. Sonobe describes the system's advantages as follows: "Naturally the system must be accurate, but measurement must also be easy because it will be used with the elderly and people with illnesses in medical settings, and this method also reduces the burden on the subject."
In a resting standing position, a person's center of gravity position sways by a few mm to a few tens of mm in the forward-back and left-right directions. Balance is evaluated based on the relationship of that swaying and the restoring force, but if the sway is larger than that, for example when measuring neurological patients, the situation is handled by adding an inertia sensor. This too achieves high estimation precision. 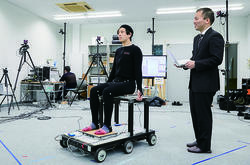 Adopted in multiple medical settings and new knowledge is being acquired

In collaboration with medical institutions, the center of gravity measurement method using a force platform is already being used in a number of clinical settings. One example is patients with cervical myelopathy, where the nerves in the vertebrae of the neck are compressed. With this condition, there is numbness in the lower body and extremities, but no method has been established for discerning its magnitude. The only way is to ask the patient about their symptoms, and make a judgment on the patient's condition based on the doctor's heuristics. The only treatment is surgery.

"If the timing of surgery is too late, it's difficult to achieve a cure. On the other hand, there are cases where symptoms do not progress beyond their current level. I heard from doctors on the front lines that they cannot recklessly perform surgery, and that it is extremely difficult to make these decisions. I'm conducting research to see whether data on the body sway of patients can be used as an indicator for gauging the timing and need for surgery."
Based on the data gathered at present, it was found that patients with cervical myelopathy show more frequent swaying to the right and left of their center of gravity position. When a person feels that force is being applied in an unbalanced way to either the right or left leg, a healthy person achieves balance by correcting that. However, it is conjectured that when sensation on the sole of the foot is weakened due to cervical myelopathy, then perhaps correction cannot be done, and the person sways to the left and right for that reason. The degree of this swaying is one guideline to the degree of severity, and can also serve as an indicator of the degree of recovery after surgery.
In the same way, it was found that, in cases of diabetes, sensation in the ankles dulls due to numbness of deep sensation, and delays in the nervous system, and sway to the front and back become comparatively larger. In Ménière's disease, which has symptoms like dizziness and ringing ears, slow swaying of about five seconds occurs. These findings were obtained for the first time using the center of gravity measurement method of Assoc. Prof. Sonobe.
"These systems have been introduced at hospitals starting two or three years ago, and we have gathered data a little at a time. The measurement method has gained an excellent reputation because it can easily capture accurate data. If, going forward, we gather more cases, and analyze the relationships between illnesses and center of gravity balance, then I think this tool will be even more useful than it is now for healthcare professionals and patients.
Possible applications outside of medical settings include conditioning management for occupations where poor physical condition may lead to major accidents, e.g., drivers/operators in the construction industry or public transportation. With this system, workers can simply stand on a force platform when they arrive at work, allowing preventive detection of illnesses that they themselves are not aware of such as disturbance of consciousness. Naturally, the method can also be applied to sports engineering issues, such as efficient training methods.
"At present, as research in the same field, I am working on measurement when standing on one foot. When a patient with a fracture uses crutches, he or she begins to practice by standing on one leg, but some young people today cannot stand on one leg. They want to do training for that purpose, but at present don't know what to do or how to do it, and thus I was requested by physical therapists who want to capture data."
What is the reason why they cannot stand on one foot? Among people who cannot stand on one foot, is there one pattern or multiple patterns? In areas like these, there are high expectations for elucidating causes through data gathering and analysis, and applications to rehabilitation.
Beyond cases like this, applications in the medical field using the center of gravity estimation method developed by Sonobe have only just begun. In the future, there is potential for new discoveries in various fields as analysis of data progresses, and the results may move the medical field one step further ahead. 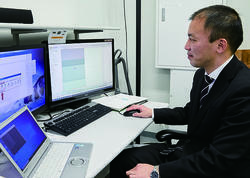