Closing in on the mechanism of "memory," which is what makes us human

Seeing, hearing, tasting, moving the body, talking, remembering. All human behavior is controlled by the activity of complex networks of interwoven neurons that make up the brain. The mechanism for higher-order information processing, such as cognition, memory, and learning, is particularly advanced in humans, and it is essential since it allows us to perform a host of mental activities.

As an example, we can learn, think, judge, and act. However, the massive and complex mechanism of memory has not been elucidated for the most part.

To begin with, the human brain is not easy to examine. Tens of billions of neurons form a virtually infinite number of circuits and networks and examining each one would be impossible. Professor Nakahara has used functional magnetic resonance imaging (fMRI) to focus on the activity of the massive and complex networks in the brain.

fMRI emerged in the 1990s. The field of brain science has seen remarkable progress as a result of the widespread use of fMRI to measure human brain activity. fMRI visually depicts changes in blood flow and changes in oxygen metabolism associated with neural activity in the brain. This technique reveals human brain activity in a non-invasive manner. fMRI allows researchers to investigate the relationships between cognitive tasks and brain activity, and understanding of brain function has made great strides as a result. 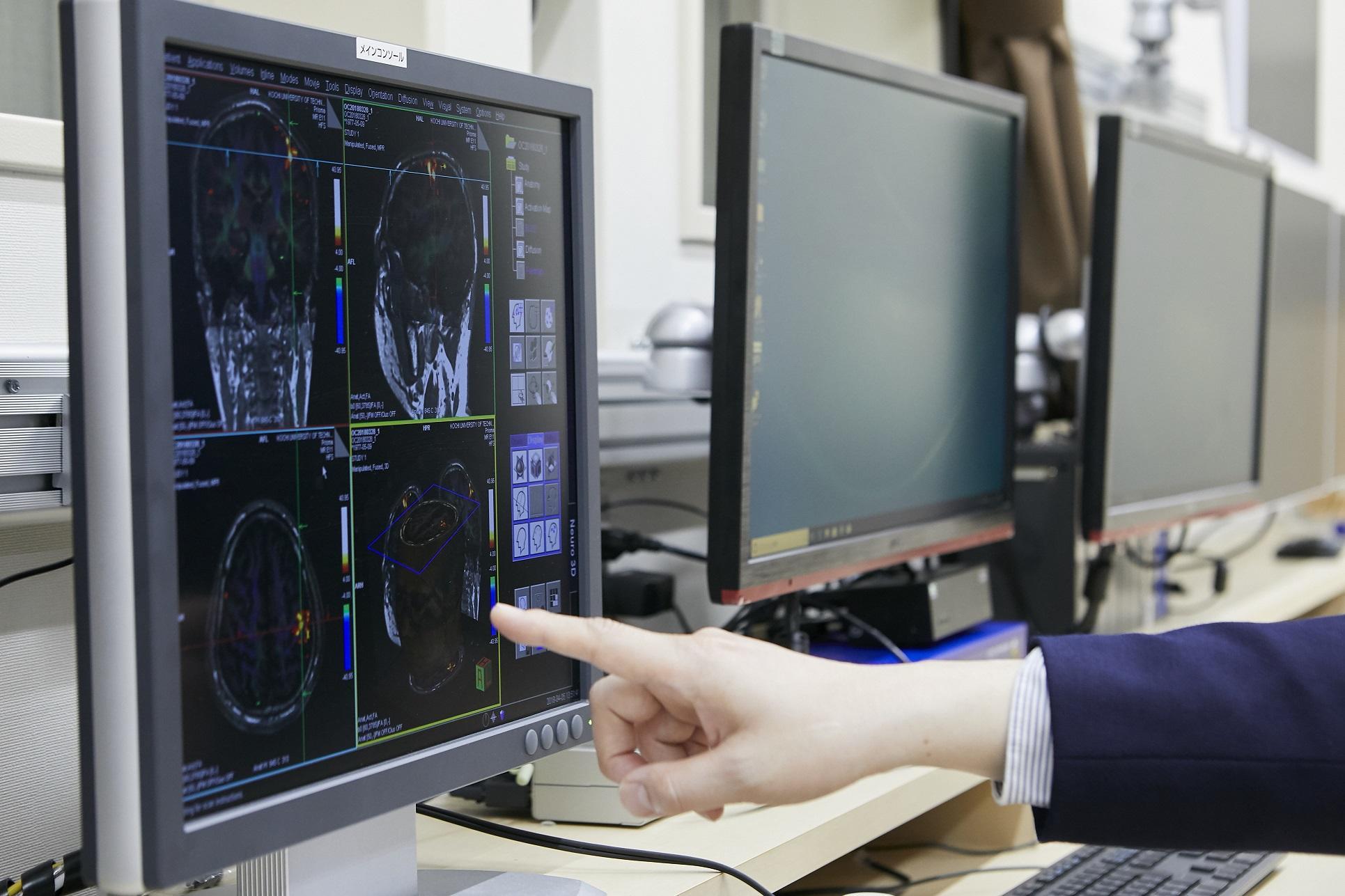 When Professor Nakahara first became a researcher, brain activity was typically studied in animal experiments by inserting electrodes into the brain and examining electrical signals. As he explained, "In an experiment to record neuronal activity with electrodes, animals were shown diagrams. I was blown away as I heard a popping sound from a monitoring speaker as neurons fired." This firsthand sense of the brain in action drew Professor Nakahara into brain research. Afterwards, he was involved in cutting-edge research that used fMRI to examine the brains of non-human primates. This is when he became aware of the potential of fMRI.

fMRI uses a magnetic field and radio waves. It allows non-invasive examination of the activity of the brain as a whole, and it also allows a comparison of mechanisms in human and animal brains. PET is a familiar technique that is used to look for cancer. fMRI can be performed repeatedly, which is a major advantage over PET, and fMRI is anticipated to develop into the most powerful technique with which to examine the human brain.

Professor Nakahara has consistently contributed to achieving world firsts using fMRI. When he worked as a post-doctoral fellow at the University of Tokyo, he and his colleagues were the first in the world to use fMRI to directly compare the functional architecture of the prefrontal cortex in humans and monkeys.

In 2018, Professor Nakahara's research team elucidated part of the mechanism for the formation of "episodic memories," which are related to events or situations that an individual has experienced, in the human brain for the first time. Professor Nakahara is a major reason for state-of-the-art MRI being introduced at the University's Research Center for Brain Communication. 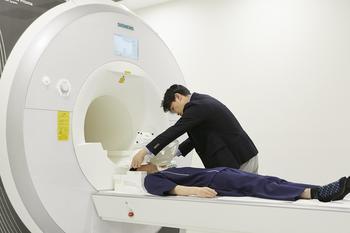 Successful identification of patterns of brain activity, a world first

Events and situations that we experience every day are registered in the cerebral cortex of the brain as "episodic memories." However, why do some events or situations remain as memories while others are forgotten? Previous research revealed that the brain's networks "are always spontaneously active" and that "connectivity patterns vary about every 30 seconds or so, and this temporal fluctuation of connectivity patterns are associated with various cognitive functions." Therefore, Professor Nakahara has hypothesized that successful encoding of episodic memory is also dependent on the time-varying connectivity patterns of the brain-wide networks. 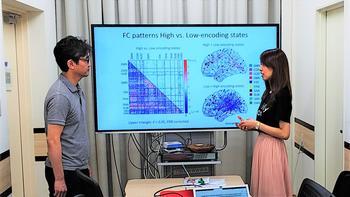 In an experiment, fMRI was used to monitor participants' brain activity while they were shown 360 different photographs from various categories - such as animals, plants, daily objects, buildings, and landscapes - one by one. Some of the content of these photographs was expected to be incidentally encoded in participants' episodic memory. Whether the content of a given photograph was successfully encoded in memory was assessed with a recognition memory test that was conducted 20 min after the end of the fMRI scan with no previous notice. Through these experiments, they found that how well episodic memories were encoded varied from period to period. Between successful memory encoding and poor memory encoding, Professor Nakahara analyzed how network connectivity differed in the brain as a whole.

As Professor Nakahara explained, "The results suggested that large-scale connections among networks across the entire brain are crucial to the encoding of episodic memories." The research was published in the journal eLife on June 18, 2018.

Elucidating the pathology of memory deficits associated with aging and dementia

The brain continues to develop while changing constantly. This is referred to as the brain's plasticity. This attribute is what allows a newborn baby to see and then talk as development.

When people who are born with impaired vision read braille, a look at their brain activation indicates several truly fascinating facts. The brain area that was originally for vision becomes active and "takes the place of vision."

With a gleam in his eye, Professor Nakahara remarked that "the state of the brain is not simply inherited from birth. Rather, the brain can change and develop depending on subsequent conditions and learning. I am constantly thinking that living beings are amazing." 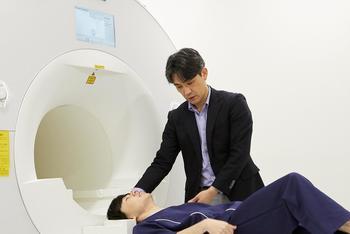 The increase in the number of people with dementia as the global population ages has become a societal problem. Professor Nakahara and his colleagues elucidated part of the mechanism for the formation of episodic memories in the human brain. Results of their research have substantial implications for medicine as well. Their research can help to elucidate the pathology of memory deficits associated with aging and dementia, and Professor Nakahara and his colleagues plan to conduct joint studies of the elderly in the future.

As Professor Nakahara explains, "The human brain produces the social traits of the people who comprise society. I think such research will progress in the future." If the brain mechanisms that facilitate various processes such as thought and emotion are elucidated, then creating a world without poverty or conflict might just be possible.

"Sometimes repeatedly performing simple tasks while conducting an experiment is a chore. That said, I would be happy to obtain even a small unexpected finding even once a year. Moreover, people are particularly interested in the brain mechanisms because almost all aspects of our lives are more or less dependent on brain function."

In addition to memory, Professor Nakahara is interested in the question of "how does consciousness occur in the brain." This is the overarching topic of his research. As he explains it, "It is the greatest mystery for most brain scientists. No one knows what techniques to use or which approach to adopt to unravel that mystery."