Associate Professor Matsumoto has numerous achievements as an expert in mechanical design. He has long been working the research theme, "making things that give value to local resources," particularly related to the fishing industry, an important regional revitalization target in Kochi Prefecture. Dr. Matsumoto created the "slurry ice" technique, which can keep fish and shellfish fresh for a long time by means of tiny ice particles at -1°C. That technique has dramatically improved the technology for maintaining high freshness of seafood, and has brought added value to fresh fish and shellfish all over the country.

Slurry ice is liquid ice mixed with a salt solution and small ice particles. In Japan, it has been used for cooling and preserving marine products since around 2000. The innovative point of the slurry ice created by Dr. Matsumoto is the temperature, -1°C.

Dr. Matsumoto explains, "I heard that people in the marine products industry were in trouble since fish was being frozen at around -3°C using slurry ice made with conventional equipment from overseas. Conventional slurry ice was not been widespread in Japanese fisheries even though Japan has a culture element of enjoying raw fish in forms such as sushi and sashimi."

The key to keeping seafood fresh is rapid cooling without freezing: once fish freezes, it loses its value as fresh fish. Freezing not only affects the price of fish, but also the taste. Dr. Matsumoto had an inspiration: if he could develop a mechanism for maintaining a high degree of freshness of fish and shellfish, and transporting them to distant areas without losing their freshness, that could lead to expansion of sales and enhancement of the value of fresh seafood. Undertaking this new theme, which had not been addressed in the domestic food industry, he found that the freezing temperature of most fresh seafood is between -1 and -2°C.

Dr. Matsumoto continues, "For a freezing temperature of -1°C, it is necessary to cool the fish with slurry ice at lower than 0°C but higher than -1°C so that it can be distributed without losing the fresh fish value. Focusing on that point, I pursued the development of slurry ice production, making ice from seawater diluted to 1% salinity."

The slurry ice produced by the technology developed by Dr. Matsumoto has various advantages in addition to keeping seafood as close as possible to its freezing point. One is that since the slurry contains fine ice particles of about 0.2 mm in diameter, the area of ice in contact with fish and shellfish is larger than that for conventional crushed ice, and the cooling is fast. The second advantage is that since the ice particles are spherical, i.e. they have no corners, they do not damage the fish during storage. The third advantage is that since a salt concentration of 1% has osmotic pressure closer to that on the surface of the fish, it can keep them moist and maintain their condition much the same as when they were taken from the sea. Furthermore, since the slurry has excellent fluidity, it can be transported while pumping, making it easier to use than crushed ice. Slurry ice seems to have nothing but good points.

Since its commercialization in 2008, this epoch-making technology has been used to improve the quality and branding of fresh fish and shellfish from various places around the country, including Nakatosa Town in Kochi Prefecture. It has also played a role in regional revitalization.

Realizing a direct method that can be used on demand

The slurry ice manufacturing equipment developed by Dr. Matsumoto in collaboration with companies has been put into practical use in a so-called "circulation system." By circulating diluted seawater or salt solution between the tank storing the slurry ice and the ice making machine, it is possible to increase the number of ice particles in the tank and thus produce slurry ice. However, there were some problems with this system: first, it was difficult to make slurry ice in a short time; and second, since the slurry is stored in a tank, which absorbs heat from the outside, the ice particles tended to aggregate, and the slurry ice melts.

"At that time, the circulation system could only produce a little bit of slurry ice at one time, so it was not possible to meet demand. We wanted to be able to produce slurry ice anytime and in any amount. Even if we made the tanks bigger to increase production, there was also the problem of slurry ice melting and turning into chunks of ice inside the tank."

To solve that problem, Dr. Matsumoto eliminated the tank from the existing system and developed a device that allowed a direct method where the slurry ice generated in the ice making machine was supplied directly. In other words, it looks as if the slurry ice is coming out of a tap, just like water. When the aqueous solution is fed into the generator in the ice making machine, it is expected that the device can continuously produce slurry ice on-demand. This device is expected to simultaneously solve all the problems that had been occurring in the circulation system.

Technology to maintain freshness of fish and shellfish is evolving further, in a system that Dr. Matsumoto is working on now. He aims to produce a new cooling medium that combines a bactericidal effect with the cooling effect of slurry ice. He is developing technology to automatically add aqueous hypochlorous acid, which has a high bactericidal effect and little influence on the flavor of food, to a salt solution used for making slurry ice. The new system is intended to be applied to seafood cooling and to the processing of food in general, including meat and agricultural products such as cut vegetables.

Dr. Matsumoto continues, "Current meat and vegetable cooling systems cannot maintain temperature after rapid cooling, which means that freshness is uneven. We are proposing our emergent system as a solution to that problem; it should be more efficient and cheaper."

In the future, Dr. Matsumoto will conduct field experiments jointly with food manufacturers, aiming at commercialization of the new process in 2019. If this is realized, it will attract attention as an innovative technology for cooling storage and distribution of food that has both bactericidal effect and the ability to maintain high freshness.

Recently, as Internet marketing has become popular, there is an urgent need for a distribution system that can sustain high freshness. At the same time, since the distribution of perishables has been extended to overseas shipping, technologies related to hygiene, preservation of freshness, and quality control are also evolving. Dr. Matsumoto emphasizes, "I think that in the future, distribution systems and technologies for maintaining freshness will become even more important."

Using slurry ice for foods other than fish and shellfish is unprecedented globally. We are not far from the day when the latest technology meeting the needs of the times is created in Kochi.

"Rather than just cooling preservation technology, is there a way to incorporate slurry ice into the cold chain, which is a mechanism that distributes fresh food with constant temperature, refrigeration, and freezing? This will be the focal point for future developments."

Through his research, Dr. Matsumoto is looking far beyond the simple design of machines, to the future of perishables distribution.

Developing equipment to make the best use of regional resources

Dr. Matsumoto is focusing not only on the production of slurry ice but also on applications of that technology, including the development of a freeze-concentration system. For liquid foods that suffer deterioration of ingredients and loss of aroma when heated, he has been developing a technology that can concentrate foods and still maintain their quality. 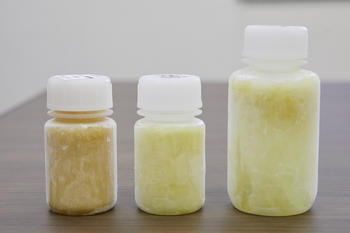 In that process, first the liquid food is made into slurry ice. After the ice particles are eliminated, the remaining solution become dense. If this process is repeated, the food gradually becomes concentrated. This method of concentration without heat or pressure has the advantage that the aroma and nutrients are not lost. Application of this system to juices, soup stock and supplements is also attracting attention.

Dr. Matsumoto's research approach is not just the development of equipment. Even though he is an expert in machine design, he always thinks about development with a management perspective and a total system conception. He says that for him, thinking about how to build devices to realize some expected output, and perfecting them through trial and error are worth doing.

He says, "The original technology that was created in this area makes it possible to develop local resources in various forms, and as a result the area is enriched. I would like to be involved in manufacturing that results in such a cycle."

Dr. Matsumoto's mission is to develop equipment to utilize regional resources. He is creating cutting edge technology in Kochi while keeping in mind the area and the life of the local people.