Towards the ultimate form of microactuators driven by liquid crystal

Pioneering the use of liquid crystals in the mechanics field

Fluid dynamics is the field that deals with the flow of fluids (a general term for liquids and gases) and generally deals with the flow of water and air. On the other hand, complex fluid dynamics targets literally complex fluids in which a higher-order structure with a size much larger than its constituent molecules exists inside a fluid, and the structure changes depending on the surrounding environment and the flow state of the fluid itself.

Among complex fluids, Professors Chono and Tsuji have studied "liquid crystals" which are something in between liquid and solid. When we hear the term liquid crystal, many of us will associate it with a monitor or display. In fact, the use of liquid crystals has been limited to the optical field represented by displays, but unlike in the past, the two researchers have continued to study new possibilities of liquid crystals from a dynamic viewpoint.

One property of liquid crystals is that when a voltage is applied to them, the direction of the molecules changes and liquid crystals flow. In 2002, Profs. Chono and Tsuji confirmed this property experimentally. That was the starting point of the research that led to the present development. 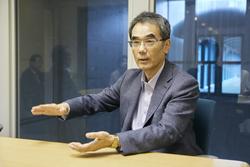 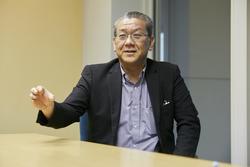 Later, they discovered that using advanced simulation technology, they could control the direction and magnitude of the flow by arranging liquid crystal molecules in a certain arrangement and applying a voltage. Then, working from that principle, they conducted an experiment in which they poured liquid crystal between two glass plates when only the lower plate was fixed, and applied a constant voltage. The proof was there: the liquid crystal moved the upper plate.

Not only that, liquid crystal behaves like a liquid macroscopically, so if a liquid crystal is poured between curved plates (instead of flat plates) and concentric cylinders, a motor may be created. Even a small amount of liquid crystal could make a very small motor. From that revelation, they developed a 1.2 mm diameter motor, driven by a liquid crystal, that can rotate a cylinder. In 2007, they created the world's smallest motor, with a diameter of 0.2 mm, and now they have succeeded in reducing the diameter to 0.1 mm. 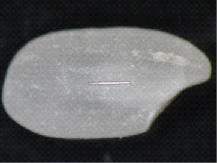 (A micro motor with a diameter of 0.1 mm turns the inner cylinder by converting electric energy into liquid crystal flow.)

Prof. Chono smiles and says, "We were the first to move things with liquid crystals. Normally no one would even think of such a thing... It has long been known that applying a voltage to a liquid crystal changes its viscosity. However, no one thought of using the liquid crystal itself as a driving force in a device. Perhaps there are no other examples of such research in the world."

In fact, the presentation of the flow of liquid crystals at the Japan Society of Mechanical Engineers was initially seen as unacceptable. However, the excellence of the research was gradually recognized, and in 2007 they were awarded the Japan Society of Mechanical Engineers Award (paper), the most prestigious and historic award in Japan in the field of mechanical engineering. Profs. Chono and Tsuji had pioneered a way to greatly expand the use of liquid crystals, from simple display materials to next-generation mechanical materials.

30 years since their initial fascination with liquid crystals: more treasures yet to be found?

Prof. Chono and Prof. Tsuji have been working together for 30 years; they work exclusively as a researcher duo. Where did the two meet and how did they begin researching liquid crystals?

Prof. Chono has been working on fluid mechanics since graduate school. In 1989, when he was an assistant professor at Fukui University, he joined a prominent US researcher as a visiting researcher, aiming to deepen his theoretical study of viscoelastic fluids (which have both viscous and elastic properties), which was his interest at the time. However, the researcher told him that "That kind of research is old. My interests have shifted elsewhere." The researcher's new object of interest was liquid crystals. The more young Chono learned about that topic, the more he was intrigued. His interest in those strange materials that were neither solids nor liquids grew, and his research interest shifted from viscoelastic fluids to liquid crystals.

"In fluid dynamics, which targets flow of water and air, it is only necessary to investigate velocity, pressure and temperature. However, liquid crystals are very complicated: they have an additional unknown quantity, molecular orientation. Since theoretical analysis was difficult, simulating the flow with a computer was very interesting." (Prof. Chono) 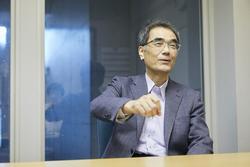 Prof. Chono returned to Fukui University and began work with a focus on liquid crystal research. At the same time, Prof. Tsuji, then a fourth-year undergraduate student, was assigned to Prof. Chono's lab.

Prof. Tsuji gradually found that the topic was a good research theme for him. Since then this team of two has made notable achievements one after another.

"I've been completely focused on liquid crystals for thirty years, but there's still a lot to discover. I think the research mysteries about liquid crystals won't be exhausted in my lifetime. In that sense, I was lucky to lose the lottery back then (laughs). Liquid crystal research is everything to me." (Prof. Tsuji). 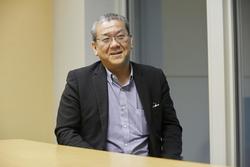 Further refinement of the world's smallest motor: a contribution to future medical care

The development of devices using the flow of liquid crystals, which the two researchers have been working on, is continuing to make progress. In recent years, MEMS (Micro Electro Mechanical Systems), a system incorporating microelectronic circuits and mechanical elements on a single substrate, have attracted attention. Now there is a need for further expansion of the mechanical elements that can be used in the micro/nano range.

Applying the property of liquid crystal, which is liquid and does not have a proper shape, and applying voltage to micro-sized liquid crystal droplets, Profs. Chono and Tsuji have been developing a driving device, the Amorphous Actuator, which operates by flexibly adapting its shape to the surrounding environment, similar to the action of amoebas.

"The idea is that the liquid crystal does not have a proper shape, and it is soft, so if you cover it with a soft, flexible film, you can freely change its shape and fit it into the surrounding environment. That is the ultimate type of liquid crystal based actuator that we are thinking of for use as a drive source. " (Prof. Chono)

If such an amorphous actuator could be realized, it could move inside a blood vessel without damaging the blood vessel wall--which would greatly contribute to the realization of a new paradigm drug delivery system and to remarkable progress in catheter treatments. 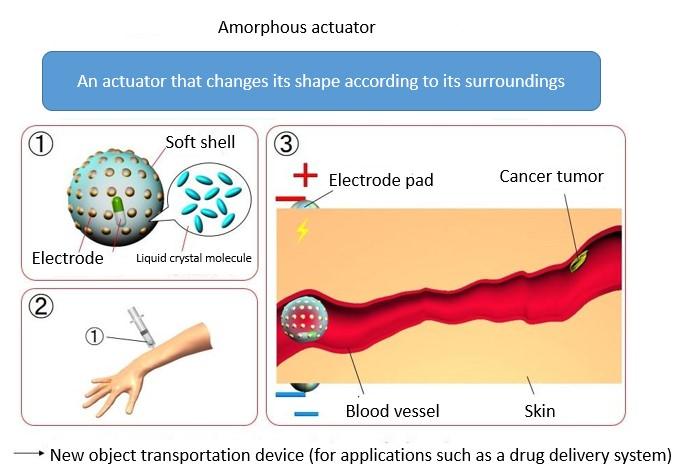 Therefore, if a temperature distribution is induced in the liquid crystal, the two phases, the liquid state and the liquid crystal state, can coexist in close proximity. Now, using the interfacial force between the two states, the team are working on the development of a micromanipulator (a remote control device that can control the movement of an object with high precision).

"There are two phases in liquid crystal, the isotropic phase and the liquid crystal phase, that we can create by controlling the temperature. This generates an interfacial force at the boundary between the adjacent phases--and that force can move objects instantaneously. In addition, that force has the potential to move objects with very high accuracy, and since the two phases behave like liquids, it does not harm the object. We believe that it will be possible to use this technique to create manipulators for use in medical applications." (Prof. Chono)

Since this manipulator is composed of just a liquid crystal as the driving source and energy from a heat source, the system can be simplified and miniaturized, so we expect to be able to mount the manipulator on a MEMS. 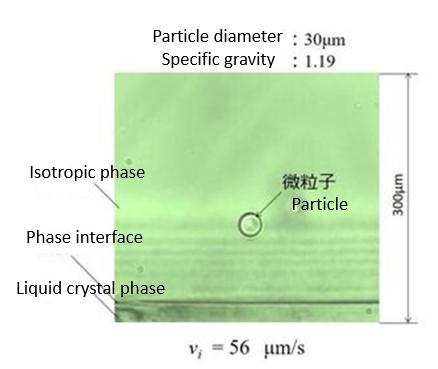 In recognition of their achievements, Dr. Chono and Dr. Tsuji received the 2019 Division Award and the Frontier Commendation, respectively, at the Fluid Engineering Division of the Japan Society of Mechanical Engineers (JSME) in November 2019.
The Division Award is given to individuals who have contributed to the development of mechanical engineering and industry in Japan through achievements in the fields of science, technology, and education related to fluid engineering. The Frontier Commendation is given to individuals or groups who have achieved outstanding results through innovative technological development in unexplored fields, with the potential to expand the technical fields in the realm of the Fluid Engineering Division. These are very prestigious awards, presented to only a few of the approximately 6,200 official members of the Fluid Engineering Division each year. 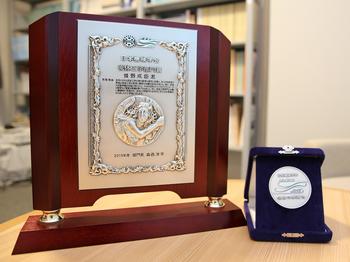 Prof. Chono says, "When I started this research, I was not aware what it might be useful for. I just focused on clarifying of the relationship between velocity distribution and molecular orientation distribution by means of numerical calculation." Later, he came up with the idea of applying liquid crystal technology to mechanical engineering. He elucidated the mechanism, and that led to the development of devices in line with the recent trend. These achievements contribute to the path towards practical application, and they are also significant in the sense that they open up new academic fields.

"Only a fraction of the world's science and technology can be put into practical use. I think it may be significant that we have altered history by creating a new field, in fact a new academic discipline, beyond the matter of finding applications of the outcomes of this research. I believe that if we continue to do research wholeheartedly, we will surely open up new ways of helping society." (Prof. Tsuji)

They say that their big goal now is to establish the mechanical application of liquid crystals as an academic discipline.

"It's been 30 years since I was first attracted to liquid crystals, but there are still many things I don't understand, so I have to keep steadily pursuing the work I'm doing now. I would like to create a new field of study called "dynamics of liquid crystals, beyond fluid dynamics." (Prof. Chono) 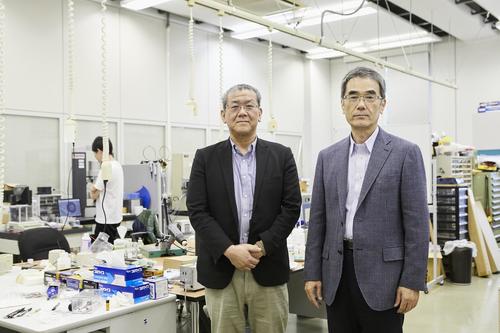