Bright Future Architecture for the Rural Regions of the World

Currently our planet Earth is facing a crisis due to various environmental issues. In such a situation, in order to establish a sustainable society, one important issue is the development of an architecture that is considerate of nature. We must strive to create architecture with a smaller environmental load and various aspects of 'naturalness.' Concretely, we have been working to envision a method in which natural materials such as soil, straw and stone are used as building materials, in their original form as much as possible; and to arrive at architecture utilizing non-fossil resources such as solar and geothermal energy.

Dr. Kikuma Watanabe, associate professor in KUT's School of Systems Engineering, has been working to develop 'earthbag architecture,' based on the piling up of bags of earth to make buildings in various places around the world. This is a simple method in which local soil is put in bags to make building blocks which can be piled up to make buildings, and returned to the earth after the building has reached the end of its usefulness. This 'natural architecture' with small environmental load has been drawing attention internationally.

Besides earthbag architecture, Dr. Watanabe is continuing research and development for 'passive solar houses.' The passive solar system is a technology for capturing and transferring solar energy (heat and light) in a building as efficiently as possible by means of a combination of outer insulation, ventilation, and control of the size and orientation of the capture opening, obtaining a very comfortable thermal environment throughout the year.
A significant characteristic of both earthbag architecture and passive solar housing is smaller environmental load; this has attracted attention internationally. However, in the course of mastering these architectural techniques, implementing them in various regions around the world, and reframing them for each application, it became apparent that such architecture has potential at the fundamental level of architecture, which cannot be assessed in terms of environmental load alone.

This facility is a base for activities of Al-Jawasreh, a women's group in the poverty stricken region of South Shounah, Jordan. It is a community center which can also serve as a literacy classroom. The first objective of the construction of this facility was to ease the poverty of the area and encourage the autonomy of Al-Jawasreh.

In contemporary Jordan, which has passed through a high economic growth period, stone architecture, the traditional method of construction, is about disappear. Thus the facility also plays a role in preserving that construction technology.

The site for the facility is a corner lot, a long, narrow, north-south strip of land. It was planned to build a community center on the south side and to create a farm on the north side. The center was constructed with a combination of stone construction, reinforced concrete construction, and earthbag architecture. The main structure is L-shaped: one wing is a classroom/workshop, and the other is a kitchen/ dining room. A large opening facing south functions as a passive solar system and provides a bright space, quite rare in the area. The point linking the two wings is connected to an earthbag dome, which serves as a reception room. The land is low as a result of digging the soil for earthbags. By design, the resulting low area can be used as a farm. The stone construction was supervised by a group of local stonemasons; the earthbag parts were constructed by local people. 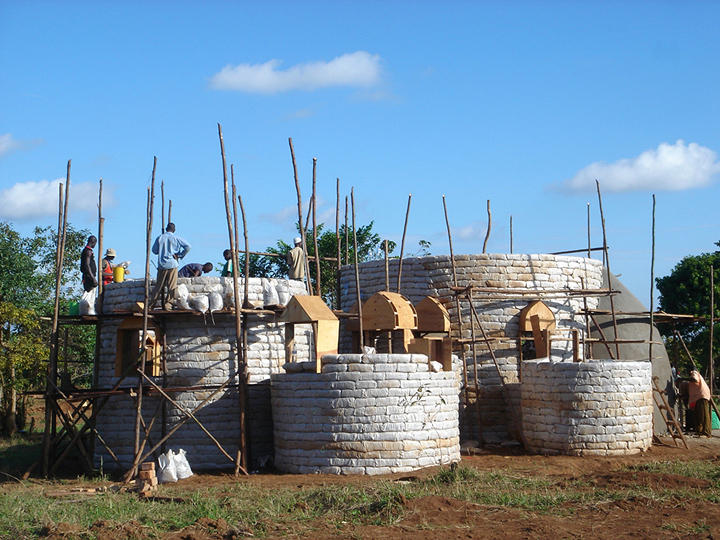 One of the significant aspects of this project was the earthbag technology transfer achieved by the leader of the group of orphans. The project attracted great attention as a model ecovillage, and subsequently the international ecovillage competition, 'GHANA: 2011 OPEN Architecture CHALLENGE,' was held, with Dr. Watanabe serving as one of the judges. Furthermore, the construction of earthbag housing began in Kenya in 2011. The seeds sowed in Africa are slowly but steadily bearing fruit.

In the aforementioned community center in Jordan three different kinds of construction were used in the right places to create a multiple system for response to gravity, the nemesis of architecture. This is the fulfillment of a dream: connecting the past to the present to work towards the future, combining traditional, contemporary and innovative futuristic architecture.

On the other hand, the ecovillage in Africa was constructed by earthbag architecture alone. However, as a prototype, it fulfilled another dream, sustaining the traditional cultural form by introducing circular planes representing African cosmology into the general design.

It is also significant that both projects were completed through the involvement of the local people, dreaming, shaping and creating. This is the essence of integrated fundamental architecture. Dr. Watanabe says, "I would like to continue using this approach and develop it further."

Floating in the sky, a school for Thai orphans

This school aims to help alleviate poverty in Shangkhaburi village, Thailand, located near the Myanmar border. There are a lot of immigrants and orphans in this area, and the adults are so poor that they cannot raise their children without support.

We aimed to help to provide a good future for these kids, and we hoped that the school we designed would help them realize their dreams. To begin, the teacher asked the children to draw their dream images of the school building. One of them drew a flying ship. We adapted his idea, and translated his drawing into the architectural design. The image was adapted into two main architectural components: round, earth-bag volumes on the ground, capped by a light steel structure finished with bamboo and a grass roof.

The round volumes create a warm interior, fostering a sense of comfort for the children in the earthen prayer dome and classroom. The floating level above functions as a Buddhist activity room and learning area. A gentle breeze flows through the thatched roof, giving the feeling of being aboard a ship. The upper floor connects to the earth-bag domes below through two openings.

Since its completion, the school has become a vibrant place for the community to enjoy study, play, and prayer everyday. The interpretation of the children's dreams into the architectural form establishes a foundation for leading the children to a bright future. 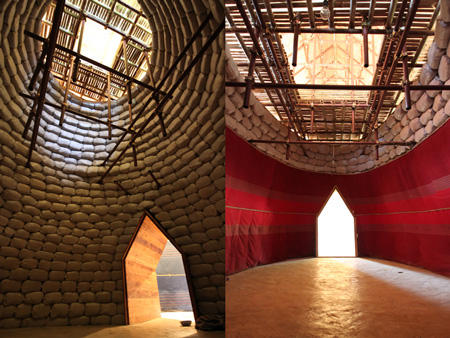