Infrasound tsunami sensors created from the combination of science and engineering

Prof. Yamamoto's goal is to integrate science and engineering for the purpose of observing the periphery of the universe and analyze data, as well as to develop new observation equipment. They work with the students to develop equipment. One result of these efforts are infrasound tsunami sensors that detect the occurrence of tsunamis and provide preliminary reports on their size and arrival time. This is a tsunami version of the earthquake early warning system, and is intended to lead to rapid tsunami evacuation in the future.

Infrasound is very low-frequency sound that cannot be detected by human ears. It occurs in conjunction with geophysical changes that cause massive disasters such as earthquakes, tsunamis, volcanic eruptions, and other large-scale phenomena. In some cases, these changes can reach a distance of over 1,000 km. Prof. Yamamoto, who has done research focused on sound, said, "I was able to pick up these sounds early, and I was able to use it for a wide range of purposes. If we can make people aware of this, it may lead to better disaster prevention," he said, which lead to the beginning of the development of this product. It went on to be commercialized in February 2015 after working with companies to improve the technology and accuracy for practical use. This is the first time that domestic infrasound sensors have been used commercialized, and is the first comprehensive infrasound sensor in the world to be used specifically for tsunamis.

Most conventional tsunami sensors are set in the ocean. Some were installed off the coast of Sanriku, but the Great East Japan Earthquake destroyed the local communications, broadcasting, and power infrastructure. This prevented tsunami information from being shared, which led to the spread of the damage. This product is land-based, and easy to handle. It has the advantage of having a large monitoring area and the ability to work independently for a time without communications or power.

What's even more groundbreaking is that the moment an earthquake occurs and the infrasound reaches the sensors, the scale of the tsunami can be predicted. In other words, it leads to a faster and more accurate calculation of the tsunami's magnitude. Until now, tsunami magnitudes could only be calculated based on past tsunami records and might be lower estimated. The fact that the Great East Japan earthquake was thought to be lower than the actual tsunami led to more damage. "To lower the scale of the damage we sustain, we need to accurately predict the scale of disasters based on real-world observations to determine what we're missing and fix it," he said enthusiastically.

Establishing units on coasts nationwide, for a network for tsunami observation stations

Currently, they are using infrasound tsunami sensors to build a community-based tsunami prevention system. They are working to create an observation network in Kochi Prefecture. A total of 15 units were installed in coasts around the prefecture, centered around Kuroshio Town, which was hit with the highest tsunami in Japan based on damage estimates for the Nankai Trough earthquake, and Cape Ashizuri in Tosashimizu City, and Cape Muroto in Muroto City.

In addition, the more points that are observed, the more accurate the data becomes, and the more accurate the time of arrival and the size of the tsunami can be calculated and shared. He says, "This is why we want to increase the number of installations in the coastal areas around the county." They are planning to establish a nationwide observation network in the areas where tsunami damage is predicted to occur and carry out empirical research.

"We have developed a sensor system to complement existing tsunami prevention measures, and aim to establish a network and disaster prevention system that used land based facilities to the greatest extent possible. The marine sensors currently in widespread use are in the hundreds of millions to tens of billions of yen. This system is much cheaper and easier to maintain than. They can be installed on land, and won't easily fail in any situation other than power outages. In the future, we'll be able to help in other countries outside of Japan as well, such as Indonesia and Chile, which are likely to be affected by tsunamis." 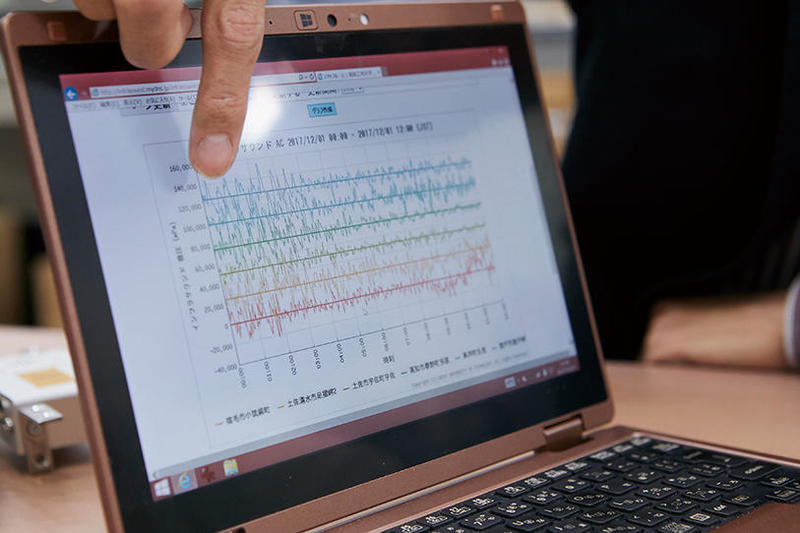