Researchers at KUT's BrainCom, Keio University, and Melbourne University have discovered the mechanisms by which anticipation of the future gives rise to self-controlled decision-making in the human brain

A research group including former graduate student Daiki Tanaka, Associate Professor Koji Jimura at Keio University (also a visiting associate professor at the Research Center for Brain Communication (BrainCom) at KUT), Professor Kiyoshi Nakahara, Designated Professor Masaki Takeda, Research Associate Ryuta Aoki (at the time of the research) at BrainCom, and Associate Professor Shinsuke Suzuki at Melbourne University found that the prefrontal cortex of the human brain is associated with the anticipation of desirable future events that have never been experienced. This mechanism was enhanced in individuals who were more self-controlled based on their experiences. The group's findings suggest that people can, when faced with unexperienced and uncertain circumstances, choose the most appropriate action over the long term by anticipating the future. Their findings also suggest that dysfunction of the prefrontal mechanisms underlying anticipation of the future may be involved in psychopathologies such as drug and alcohol abuse. The group's research was published in the Journal of Neuroscience, the official journal of the Society for Neuroscience, on December 9, 2020.

"Which would you choose, 5,000 yen today or 10,000 yen a year from now?" This question raises the dilemma of whether a person would prefer a small reward right now or a large reward given in the future. In the field of behavioral economics, how current decisions affect available options in the future is referred to as "intertemporal choice." A person preferring the smaller immediate reward can be regarded as tending to act on impulse, while a person preferring the larger future reward can be regarded as being more self-controlled. Exercising self-control presumably maximizes rewards over the long term (Fig. A). Impulsiveness and self-control are known to reflect individual choice preferences to rewards and are also involved in pathophysiologies such as drug and alcohol abuse.

These differences in experimental procedures have hampered a better understanding of the brain mechanisms underlying impulsiveness and self-control. In particular, it is unclear how choice preferences are formed and what neuronal processes are occurring in the human brain while waiting for a reward that has never been experienced. 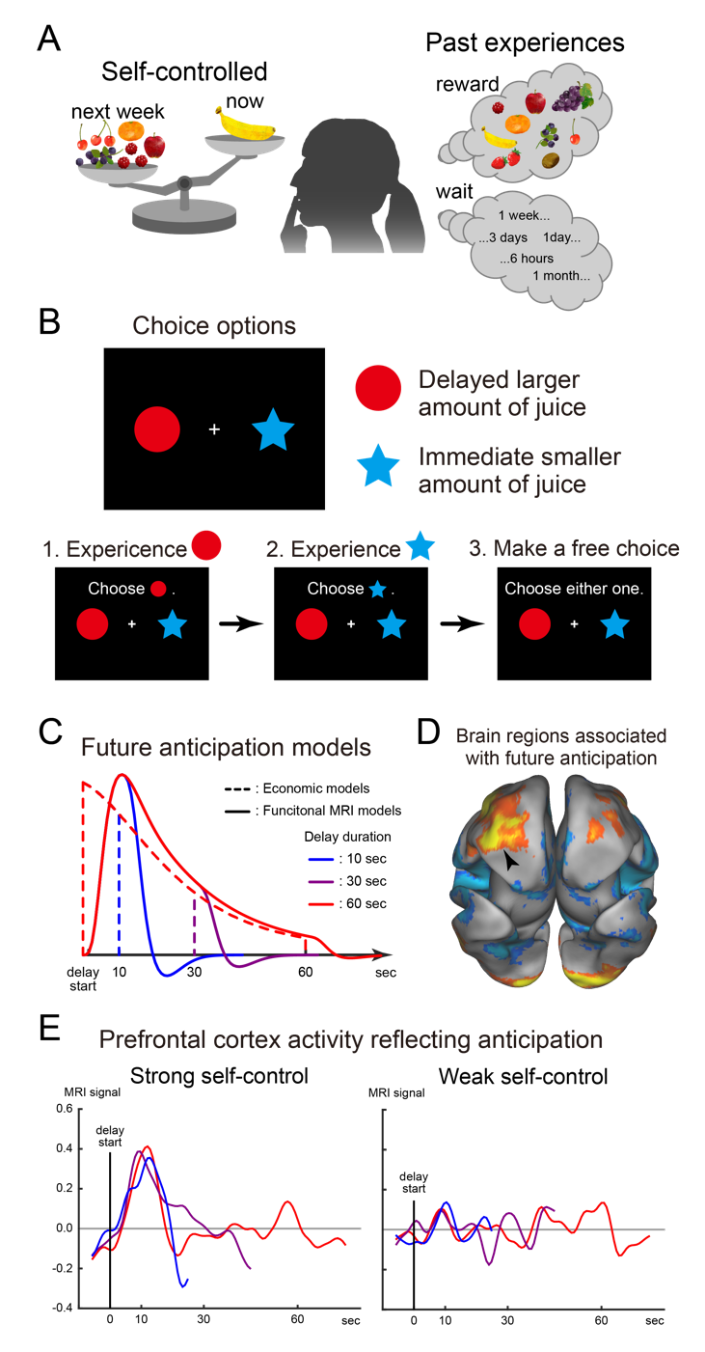 In the new study, the research group used real juice rewards in the same way as they are used in experiments with non-human animals. By using a magnetic resonance imaging (MRI) scanner at BrainCom, the researchers conducted functional MRI (fMRI)*1 experiments to monitor brain activity while human participants consumed (drunk) or waited to consume a juice reward that they had never experienced. During the fMRI scans, human participants were first given a juice reward that they could only drink after waiting several dozen seconds (delayed reward; the red circle in Fig. B1), and then a smaller volume of juice that they could drink immediately (immediate reward; the blue star in Fig. B2). Finally, participants were asked which they prefer, the delayed reward or the immediate reward (Fig. B3). A point worth mentioning is that when participants were first given the delayed reward, they had no idea how long they had to wait to receive it.

A theoretical model of anticipatory utility*2 (Fig. C) based on behavioral economics was used to explore brain regions that reflect the anticipatory utility of waiting for a reward that has never been experienced before. The researchers found that the frontal pole of the prefrontal cortex (the black arrow in Fig. D) was just such a region. Moreover, this prefrontal activation related to anticipatory utility was greater in self-controlled participants who preferred the delayed reward (Fig. E).

The research also found that another brain structure located deep in the brain, the ventral striatum is involved in counteraction between impulsiveness and self-control. If this brain region became more active when participants were consuming (drinking) the juice reward, then subsequent choice preference became more impulsive (a preference for the immediate reward). When the participants anticipated the delayed reward, the ventral striatum was inhibited by the prefrontal cortex. That inhibition was greater in self-controlled individuals. These findings suggest that greater prefrontal activity reflecting anticipation of favorable unexperienced future events helps to form strong self-controlled choice preference, which enables people to behave optimally to attain maximal rewards in the long term. The ventral striatum is an evolutionarily older region of the brain, which is known to be associated with impulsiveness in humans. The results also suggest that signals from the prefrontal cortex associated with anticipation suppress the activity of the ventral striatum.

Among the various species of animals that make intertemporal choices, the frontal pole has evolutionally developed most in humans. As the new research revealed, this brain region performs the cognitive function of "anticipating a pleasurable event without knowing when it will occur," and this process may exemplify what it means to be human. A better understanding of prefrontal activity that gives rise to anticipation of pleasurable future events as well as self-controlled choices based on one's experiences would provide clues to elucidate the pathophysiology of psychiatric disorders such as drug and alcohol abuse and overeating.

*1 fMRI: A technique for noninvasively measuring physiological signals related to the activity of neurons. This technique enables monitoring of the activity of the entire human brain in relation to various perceptual and cognitive functions.

*2 Anticipatory utility: An economic theory of utility (value) explaining that anticipation of a favorable future event itself has a value. If, for example, you plan to take a trip a year from now, then you will enjoy looking forward to and awaiting the trip. Anticipatory utility reflects the enjoyment of waiting.