Research paper by Prof. Nishiwaki and other researchers appears on the inside front cover of a British chemistry journal

The 55th issue of Chemical Communications, issued July 14, 2019, featured a research paper by Prof. Nagatoshi Nishiwaki, Assistant Professor Souchi Yokoyama of the School of Environmental Science and Engineering, and other researchers. The paper, entitled, Development of a safely handleable synthetic equivalent of cyanonitrile oxide by 1,3-dipolar cycloaddition of nitroacetonitrile, appeared on the inside front cover of the journal. As reported in the paper, members of Prof. Nishiwaki's lab are developing a method for the synthesis of compounds that until now have been considered impossible or at least difficult to synthesize simply and efficiently.

In the cycloaddition reaction, which combines a 3-atom unit and a 2-atom unit to synthesize a 5-membered ring skeleton, it is not easy to introduce a cyano (CN) group at the same time. This paper reports the successful synthesis of 3-cyanoisoxazole derivative 4 by simply cycloadding cyanoacry nitroacetate 1 and a 2-atom unit 3 in the presence of hydrochloric acid. 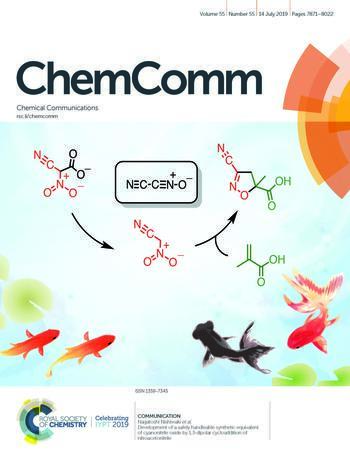 The study also clarified that "nitroacetonitrile 2 works as a three-atom unit in this reaction. Since nitroacetonitrile 2 is explosive and difficult to handle [Nishiwaki et al. used] cyanoacry nitroacetate 1, a synthetic equivalent that is safe and easy to handle." With that innovation, the team have contributed a new method of synthesis for application in the development of fields including pharmaceuticals and agricultural chemicals.