The research paper, Genealogies and ages of cultural traits: An application of the theory of duality to the research on cultural evolution, by Associate Professor Yutaka Kobayashi (School of Economics and Management) and his team, has been awarded the 2020 Feldman Prize (for publications in 2017-2018).

The Feldman Prize is awarded biennially to the two best papers published in a two-year period in Theoretical Population Biology, a major academic journal on population biology.

Associate Professor Kobayashi, who specializes in mathematical biology, is contributing to an understanding of the essence of human and social evolution through his analyses of mathematical models based on theories such as evolutionary game theory and cultural evolution theory. He also conducts research on the application of that understanding to prediction of the long-term future and analysis of social problems on various scales.

In genetics, coalescent theory supports the reconstruction of the genealogy and the state of human ancestors using the genetic information of a number of individuals sampled from a biological population. In this study, Dr. Kobayashi applied coalescent theory to evolutionary research on cultural traits such as technology, knowledge, and customs of human populations; and constructed a mathematical model to infer the cultural genealogy of sample individuals extracted from a human population.

There is always a single parent for any given gene in a living organism. On the other hand, since there are no such restrictions on cultural traits, one trait may be inherited from multiple individuals. However, the individual may not have inherited the relevant trait from any one person in the first place. These properties make the genealogy of cultural traits more complex and interesting than the genealogy of genes.

In the figure below, the circles represent individuals, and time flows from top to bottom. If we consider only the genes in a certain position on the chromosome, it can be seen that the genetic genealogy usually has an inverted dendritic structure, as shown in (a), but in the cultural genealogy, as seen in (b), there are branches and breaks in the middle of the structure. To derive the mathematical model that describes this complex genealogy, this study used the duality theory of Markov processes, which is the mathematical basis of coalescent theory. 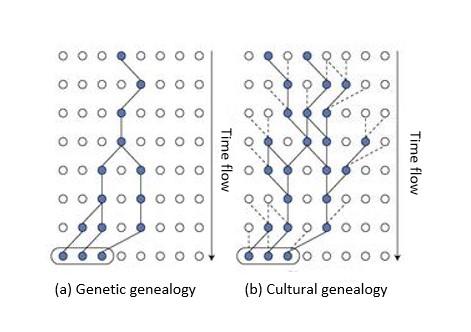 Using the mathematical model developed in Dr. Kobayashi's study, it is possible to make various predictions regarding: the proportion (frequency) of individuals with a certain cultural trait in a population; and the time of origin of the cultural trait.

For example, the figure below shows how the number of cultural traits (vertical axis) with a certain frequency (horizontal axis) and age (depth) is determined when 20 people are sampled from a population of 100 people. This is called the "age-frequency spectrum" in the paper. Interestingly, the study clarified that when the value of the variable is changed, the age-frequency spectrum undergoes a phase transition at a certain point and takes a completely different shape. Specifically, in the sub-critical phase (left figure) where the product of the variable (K) that represents social connection and the variable (β) that represents the ease of transmission of cultural traits is less than 1, only new and rare cultural traits can be observed. However, in the vicinity of a product of 1 (central figure), a pointed shape change occurs, and in the supercritical phase of a product greater than 1 (right figure), a large number of extremely old and common traits are observed (the ridge-like structure rear right).

In the future, these theoretical predictions could be applied to data to estimate actual social connections in groups and the ease with which cultural traits are transmitted; or to infer when specific cultural traits emerged. Currently, with such applications in mind, research is progressing to discover ways of connecting data and models. 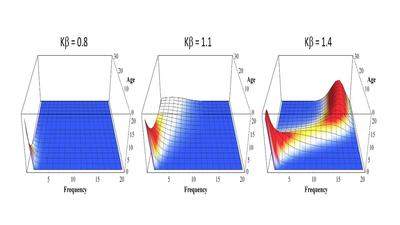 Asked his impression of the award, Associate Professor Kobayashi commented, "I am very honored. I hope this award will stimulate the interest of many researchers and students in the theory of cultural evolution."