A research group led by Associate Professor Masaki Mizuguchi of Tohoku University's Institute for Materials Research, in collaboration with a KUT group led by Prof. Takeshi Fujita of KUT's School of Environmental Science and Engineering, has discovered that the magnitude of a thermomagnetic effect*1 called the anomalous Nernst effect*2 (one of the thermoelectric conversion effects of magnetic field in Cox (MgO)1-x granular thin film*3) varies greatly depending on the magnesium oxide (MgO) content.

The anomalous Nernst effect, applied to the thermoelectric conversion aspect of this research, has been known for a long time, but due to its low conversion efficiency, it has not been used for power generation. The anomalous Nernst effect, in which the direction of the heat flow and the direction of the electrode for extracting electric power are perpendicular, is thought to be the basis for ideal thermoelectric conversion technology because the extraction of electric power is not affected by the thermal gradient. For that reason, it is now attracting attention in the field of energy harvesting*4 (the gathering of energy from such commonplace phenomena as wind and sunlight). 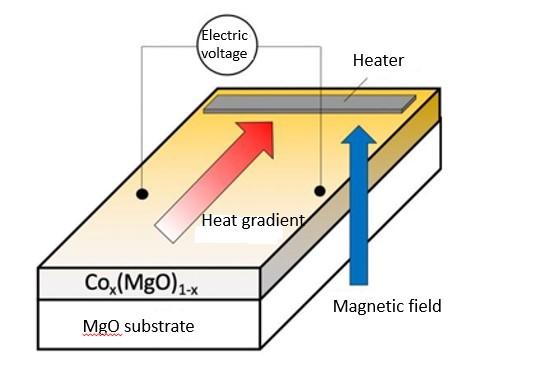 It is thought that in order to generate power efficiently using a magnetic substance with a thermomagnetic effect, it is necessary to have technology for improving the conversion efficiency by controlling the nanostructures inherent in the material--but development of such technology is not very advanced. To fill that gap, this research group focused on the use of a granular thin film material in which nanometer-sized particles of an insulator (magnesium oxide, MgO) are dispersed in a cobalt (Co) thin film to create a magnetic substance with a thermomagnetic effect. The team created various high-quality granular thin films by varying the MgO content, and discovered that the efficiency of conversion from heat to electric current could be greatly increased, depending on the amount of MgO added.

Using the granular thin film material produced in this study, thermoelectric efficiency can be freely controlled, for example, by simply the addition of an appropriate amount of insulator. This finding will allow for greater freedom of material selection in the design of power generation elements, and is expected to have wider application to the development of more efficient thermoelectric elements and energy harvesting technology. Moreover, granular thin films have not often been used for thermoelectric conversion elements,*5 but they are expected to be the target material of new research because of the resulting wide range of material selection and ease of material production.

Prof. Fujita said, "In this research, I was in charge of the microstructural analysis component. Thermoelectric materials based on the anomalous Nernst effect represent a new research field. This time the medium was a thin film sample, but we are also working on bulk material development."

The results of this research were published on April 7, 2020 in Applied Physics Letters, a publication of the American Physical Society.
Click here for the paper.

*1Thermomagnetic effect
A phenomenon in which a potential difference or temperature difference is produced by external application of a magnetic field when there is a heat flow due to a temperature gradient in a metal or semiconductor. This is sometimes also referred to as heat flux effect.

*2Anomalous Nernst effect
A phenomenon in which, when a heat flow is passed through a magnetized magnetic body, a voltage is generated in a direction (outer product direction) perpendicular to the magnetization direction and the heat flow direction. The direction and magnitude of the voltage vary depending on the magnetic material, and are determined by the sign and magnitude of the anomalous Nernst coefficient of the material.

*3Granular thin film
A generic term for a thin film having a structure in which a large number of nanometer-sized fine particles are dispersed in a matrix material. Such thin film often causes a unique electrical conduction phenomenon.

*4Energy harvesting
A power generation method that converts energy forms in the environment such as lighting, vibration, waste heat, body heat and electromagnetic waves into electric power. Due to recent increased environmental awareness and the spread of efforts at power-saving, this method (also called energy harvesting) has been drawing attention to the use of environmental energy that has been untapped until now.

*5Thermoelectric conversion elements
A general term for elements that utilize phenomena involving heat and electricity, such as the Seebeck effect, the Peltier effect and the Thomson effect. For example, the Seebeck effect (in which electromotive force is produced when two different types of metals or semiconductors are joined and there is a temperature difference between the two ends) converts thermal energy into electrical energy. This finds application in Seebeck conversion elements.