Prof. Shinomori's research group has discovered that the color impressions of deuteranopic (colorblind) individuals are largely the same as that of individuals with normal color vision

A joint research group of Professor Keizo Shinomori (the School of Information, and the Vision and Affective Science Integrated Focused Laboratory in Research Institute) has scientifically demonstrated that the color impressions of deuteranopic (colorblind) individuals greatly resembles that of individuals with normal color vision. Group members are M.S. Honami Komatsu (2019 Masters graduate of the Informatics Course in KUT's Graduate School of Engineering) and Dr. Ippei Negishi (Lecturer, Department of Media Informatics at Kanazawa Institute of Technology).

This research result suggests that it is not necessary to change colors for most product designs to accommodate for people with color vision deficiencies. However, the result also shows that universal color design is still important for signage, especially in rapid presentations. It is expected that these findings can be applied to the color design of various products and media.

It has been suggested that for genetic reasons deuteranopic (colorblind) people cannot distinguish between red and green. However, in everyday life even if they are not able to see red or green in the same way as color normal individuals, they understand the meaning of various color names in the same manner as individuals with normal color vision. The study of color vision has not elucidated the reason why this is the case, but even though deuteranopic persons cannot differentiate between red and green stimuli or have very weak discrimination between those two colors, their impressions of red and green are the same or at least similar to those of individuals with normal color vision.

To investigate this phenomenon Prof. Shinomori's research group conducted two experiments with the participation of ten color vision deficient observers and nine color vision normal observers. The relationship between 12 colors (hues) along with 3 neutral colors (white, gray and black) and 9 semantic words were studied from both directions by a combination of two experiments (for bidirectional verification of the relationship): in Experiment 1, an experimental method developed by Prof. Shinomori, the subjects were asked to choose one color in one color pair from 105 combinations of 15 colors that could correspond better to one of nine words (semantic words) with abstract meanings such as "extreme" and "tranquil"; in Experiment 2, a conventional methodology well-known as the semantic differential method, the subjects saw one of 15 colors and were asked to express their impressions of that color by selecting the magnitude of the relationship among 35 semantic word pairs.

The result in Experiment 1 showed that when the task was to select a color suitable for the impression of a semantic word, unlike color normal observers, deutans tended not to choose colors that are difficult for them to perceive (i.e. red and green) and tended to choose yellow and white. This indicates that the deutan observers are not able to see red or green as possible options in evaluating semantic words within a short timeframe (this is evidenced by the semantic words evaluated by colors being represented in one-dimensional scaling rather than in two-dimensional scaling). On the other hand, in Experiment 2 where the task was to view one of 15 colors and express the impression of the color by semantic words, there was little difference between the two observer groups, including the handling of semantic words. Interestingly, if the deuteranopic observers can understand that the color is red or green their impressions of the colors are similar to these of color normal observers; it was also found that their impression of the color was formed from past experience and learning rather than from color appearance. In other words, in the case of looking at two different colors carefully, it is possible to convey the impression of each color to dichromatic observers just as effectively as to people with color-normal vision. However, it was found that if the task is to judge the color in a few seconds (about 4 seconds on average in this experiment) it is difficult for color deficient people to understand reddish or greenish objects accurately, and the meaning of red or green color (such as stop or go in traffic signals) cannot be conveyed to them. In the case of a traffic light, for example, it is suggested that dichromats judge the meaning based on location or brightness rather than color.

Further research is needed using comparative experimentation on observers ranging in age from very young to old in order to investigate the age when color deficient individuals obtain similar impressions to those of color normal individuals. 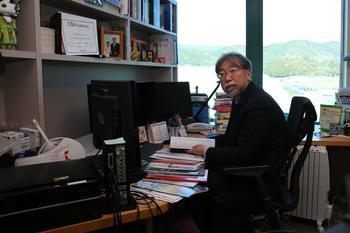 Prof. Shinomori was quoted as saying: "I am very pleased to be able to achieve meaningful results not only in color vision research, but also in affective informatics; and to compile them into a journal paper. I realized that it is necessary to establish the connection between vision which begins with the cones in the retina, and the subsequent affective (kansei) response which leads to the description of color and object impressions. So with the support of the university, I have been engaged in integrated research on the two phenomena for five years in our Vision and Affective Science Integrated Focused Laboratory. In the future, I would also like to conduct AI-based predictive research on appearance and impression."