Images of atoms aligning captured in a world first

A research group consisting of Prof. Tetsuya YAMAMOTO (Manager of Materials Design Center of the Research Institute), Rigaku Corporation, and Sumitomo Heavy Industry, Ltd. successfully captured time-dependent images of atoms aligning for the first time in the world, demonstrating the evolution of implicate order from amorphous to polycrystalline metal oxide films with a thickness of 0.05 micrometers. 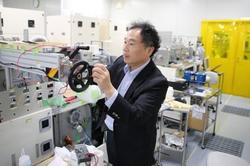 The research group successfully captured images of the alignment of metal and oxygen atoms caused by heating an ultrathin amorphous metal oxide film deposited on a glass substrate. Together with Sumitomo Heavy Industry, Ltd., Prof. Yamamoto has been developing a novel deposition system with high-density arc plasma. The use of this technology enables the deposition of ultrathin amorphous metal oxide films on glass substrates at room temperature. Those "amorphous" films contain irregularly aligned metal and oxygen atoms. Gradual heating of the substrate with the deposited film causes the development of nucleus with a size of some nanometers (1 nanometer: 0.001 micrometers) at 180 ℃. With further heating, independent nucleus grows three-dimensionally, then, transforms to crystallites showing the linkage between metal and oxygen atoms in a limited range, and followed by the achievement of crystallographic preferential orientation between the grains at 195 ℃. A series of heating treatment promotes the evolution of implicate order from amorphous to polycrystalline metal oxides films.

For the first time in the world, a high-resolution X-ray diffraction system (SmartLab) with a high-speed 2D X-ray detector developed by Rigaku Corporation allowed the observation of the dynamic aligning behavior of atoms in crystallites and the preferential orientation between grains in the film.

The use of this state-of the-art technology to manipulate atom alignment should lead to diverse future applications, including the creation of flexible materials that combine dissimilar substances such as metal oxides and polymers to create products that are lightweight and that can be bent without breaking.

Possible mechanism for the formation of a crystallized phase in amorphous metal oxides (Diagram by Dr. Yutaka FURUBAYASHI)

Prof. Tetsuya YAMAMOTO shared his thoughts. As he recounted, "The evolution of implicate order as a result of the competition between the entropy playing a role in inhibiting atom ordering and promotion of ordering in inorganic materials gives humanity a view into how to transition from the current 'clash of civilizations' to the 'mutual evolution of civilizations'."